To Goddard, Space, and Beyond! 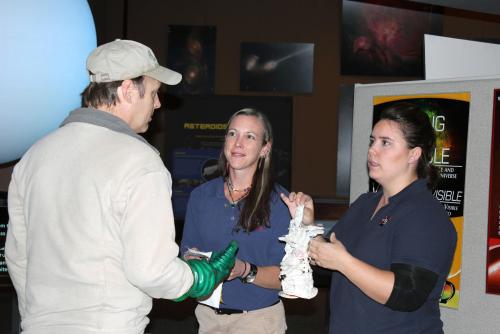 Mallory Jennings is known for her positive attitude and helpful, kind heart. She believes in giving back to her community and finding ways to encourage children to reach for the stars, quite literally. Mallory graduated from Goddard High School in 2005 and then Wichita State University in 2010 with a bachelor of science in mechanical engineering. She joined NASA as a cooperative education student with the Mission Operations Directorate at Johnson Space Center (JSC) in 2007. She transitioned to the Engineering Directorate in 2008 and spent four semesters working for various projects with the ventilation subsystem of the PLSS. She later served as a technology development engineer for the advance space suit team.

Currently, Jennings is the Deputy Systems Manager for the Extravehicular Mobility Unit (EMU) and Extravehicular Activities (EVA) on-board the International Space Station (ISS). She is there for all the spacewalks and continually monitors the astronauts as the spacewalk is going on for any problems that may arise.  She helps with various outreach programs through NASA, one of which resulted in her having a character named after her in the 2018 Girl of the Year American Girl book.  Mallory enjoys teaching and speaking about what is going on in NASA today. She often comes back to Goddard to share her experiences and excite the students about all the opportunities there are in science. She speaks at the ABC club at Clark Davidson Elementary where her mom, Debb Jennings, is a 4th grade teacher.